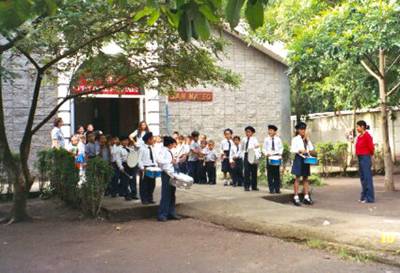 Los Amigos Episcopales is a 501(c)3 charitable organization in the Episcopal Diocese of Ohio. It is a small but very active part of the Diocese of Ohio’s diocesan Peace and Justice Ministry, dedicated to supporting Episcopal schools and preschools in the Diocese of El Salvador. Open to all children, without regard to religious affiliation, these schools are located in areas lacking any other educational opportunities.

Some years ago a psychologist from Massachusetts organized preschools there with the idea that the only way to address the awesome poverty and upheaval in that civil-war-torn country was to provide education for the children in their most formative years. Following the cessation of the Massachusetts educational grant (three years in duration, ending in 1995) Los Amigos voted to continue funding and support for the five schools now active.

Membership is open to parishioners of churches in the Episcopal Diocese of Ohio, as well as members of other Christian churches (at the present time there are about 20 members representing 7 churches) and representatives from the Cleveland-area Salvadoran community. St. Thomas has been very active with this group.

Los Amigos solicits funds from churches and individuals, as well as participating in various fund-raising projects. All monies are forwarded to El Salvador for use there. The annual budget is approximately $15,000, but this does not include funds sent directly from churches to El Salvador in response to our appeals. Our present fundraiser is our annual soup supper.

Their main mission is to assist the schools and to help the schools work towards self-sufficiency. Los Amigos members have often visited these schools and can attest to the importance in educating some of the poorest children in El Salvador. For the last several years we have successfully responded to the Salvadoran bishop’s request to be the sole support for a new small school in El Maizal, La Divina Providencia.